Sidney Sheldon , an American writer, playwright and novelist  was born on February 11, 1917 in Chicago,  Illions , USA.  He is best known today for his exciting blockbuster novels who has sold more than 250 million books . He is one of the most translated writers in the world and also only writer to have won an Oscar, a Tony and a Edgar. 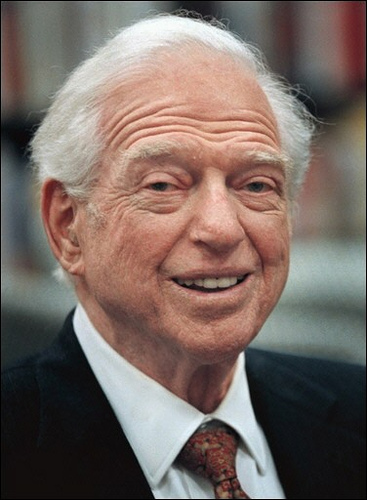 He was born to a German Jewish father and a Russian Jewish mother. At the age of ten he made his first sale of a poem for $10. Before moving to Hollywood in 1937 he attended Northwestern University where he reviewed scripts and collaborated on a number of B-movies. At seventeen he was a reader of prospective film material at Universal Pictures for $22 a week. At night he wrote his own screenplays and in 1941 he was able to sell one called “South of Panama,” to the studio for $250. Sheldon was married to Jorja Curtright Sheldon for 30 years, a stage and film actress who later became a well known interior designer.  After her death in 1985, Sheldon married Alexandra Kostoff in 1989.

He served as pilot in the War Training Service during World War II. After the war he moved to New York where he began to write musicals while also writing screenplays for both MGM and Paramount. He produced The Patty Duke Show for seven years. He also wrote the TV series Hart to Hart, Nancy and I Dream of Jeannie, which he created and produced for five seasons from 1965-1970. After he turned 50 and began writing best-selling novels such as Master of the Game (1982), The Other Side of Midnight (1973) and Rage of Angels (1980) that he became most famous. His signature format was gutsy yet feminine women fighting for survival in a world of malevolent men

Sidney has won the Academy Award for the best original screenplay of 1947 for The Bachelor and the Bobby Soxer. Before he became a novelist, Sidney Sheldon had already won a Tony Award for Broadway’s Redhead.His first novel The Naked Face won the Best First Novel Edgar Allan Poe Award from the Mystery Writers of America. The Other Side of  Midnight was a #1 New York Times bestseller, as were a number of his follow up novels.

Sidney Sheldon books have sold more than 300 million copies. Variety estimated Mr. Sheldon’s net worth, including his earnings from his film and television ventures, at $3 billion.